The year was 1989. I was first to commercialize heat in the structural pest control industry to combat wood-destroying insects like termites and powder post beetles. Since then, we have expanded and continued to develop the technology to include almost all insects, and many species of mold, bacteria, and viruses.

In 1992, Dr. Vernard Lewis of UC Berkeley received a grant from the State of California to conduct studies on the efficacy of various non-chemical approaches to the eradication of wood destroying insects. He later amplified the study to include fumigants as well. He had a special structure built which featured various types of construction designs common in California. The structure was built on UC Berkeley’s extension campus and laboratories in Richmond, California. Dr. Lewis conducted three variations of his study using the structure and lab located on the Richmond campus. The structure was about the size of a two-car garage and was named Villa Termiti by Dr. Lewis. 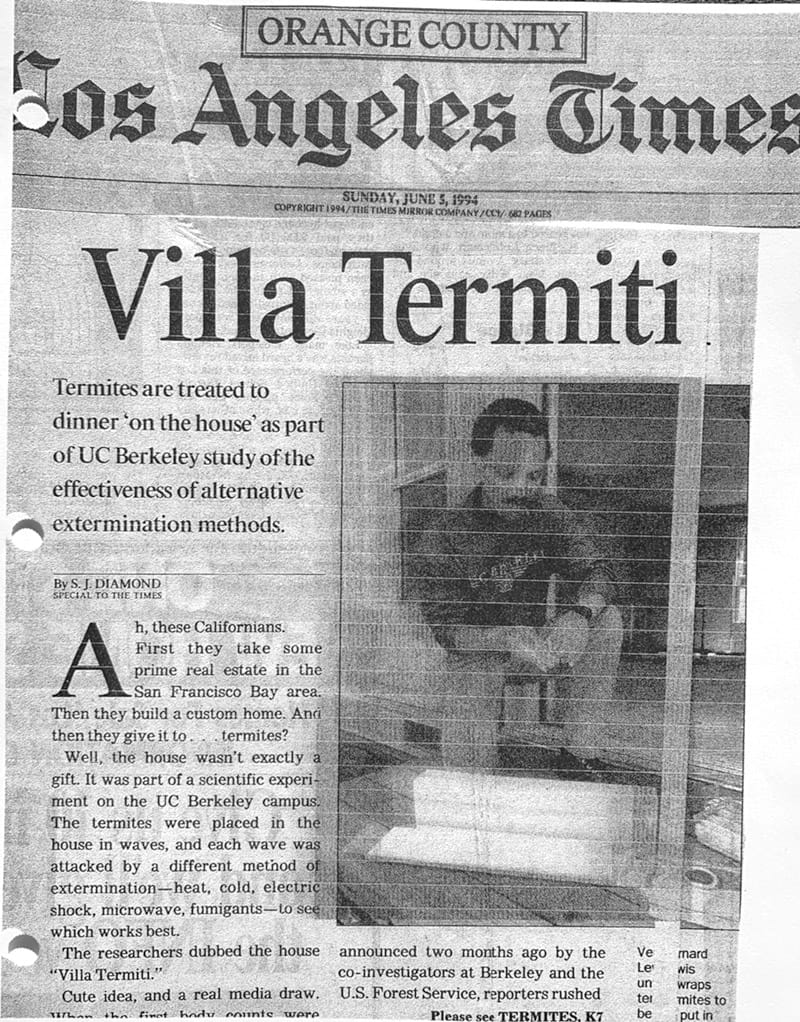 Lewis invited five companies to treat the house with their specific methodology. The five different methodologies included thermal pest eradication heat, liquid nitrogen/cold, electrogun, microwave, and fumigation. When the tests were conducted, and there were three phases to the study, those individuals applying their particular eradication methodology were shown exactly which boards were infested, except for heat and fumigation. These two approaches treated the entire structure without knowing exactly where the termites were placed. As Dr. Lewis pointed out, detection of drywoods in a structure needs a great deal of research and development. For spot treatments like liquid nitrogen, electrogun, and microwave to be effective, they must know where the queen and colony exist. (The same goes for orange oil which was not tested in this study.) It is next to impossible to do this consistently and accurately with the equipment which was in use at that time. The Liquid Nitrogen application was done by Lewis and his staff since the company utilizing this technique did not participate. In all cases except heat, technicians performing non-chemical treatments knew exactly where the artificially infested wood members had been placed.

The First Phase involved various sizes of wood that contained approximately three manually-routed gallery systems: 1) a gallery located just below the outer skin of the wood member, 2) a gallery routed in the end of the wood, and 3) a gallery in the middle of the wood. Drywood termites were placed into each gallery. Lewis used approximately 36 pieces of wood ranging from 1"x 4" to 4"x 6". These were placed in the attic, living area, and sub-area of the structure. He carefully noted the number of termites placed in each gallery and numbered each gallery in each piece of wood for identification purposes. Dr. Lewis installed these test boards throughout Villa Termiti. In the sub-area, he affixed them to the concrete foundation wall. Villa Termiti was built with a slab foundation for part of it and a raised foundation for another part.

The Second Phase of the study involved naturally-occurring infestations.

The Third Phase used test boards with manually routed galleries as in the First Phase. During the three test treatments at Villa Termiti, thermal pest eradication achieved a 100% kill of all infested wood in the attic and living space. In this phase, the crawl space was so small that none of the standard sized fans could fit inside. In the First Phase all the termites in the sub-area were killed except for a few right next to the concrete. Based on Dr. Michael K. Rust’s studies, the termites would not have infested this area as the temperature at the time was at 50°F or colder. This was too cold for them had they not been artificially placed there for testing purposes.

In the Second Phase of naturally infested wood, the termites were eradicated with thermal pest eradication in all areas of the house and sub-area. In that phase, a fan small enough to fit through the tiny crawl space was utilized and facilitated a 100% kill. In the Third Phase, the fan motor burned out during the test. All of the termites were killed in all of the wood, except for a few located on the concrete wall in a corner where the heated air was stagnated because the fan used to circulate the air burned out.

It is important to note that Vikane (sulphural fluoride) is not ovacidal in normal dosages. The reason Vikane can be used for drywood termites is that once drywood eggs hatch, they do not have to protozoa to digest wood and require adults to feed them. So the eggs hatch, but die for lack of food. In order for Vikane to be ovacidal, dosage must be increased from three to ten times the normal dosage. On the other hand, heat is ovacidal for all insects including drywood termites, cockroaches, fleas, bed bugs, and the like.

Technicians rarely know exactly where termites and the queen are located in a given structure. This is probably the most challenging piece of information to obtain in the field. Not every wall void behind drywall, stucco, bricks, and other materials can be examined. Insulation may obscure infestations in attics and exterior walls. Roof coverings may obscure termite infestations in roof sheeting and shingles. In the study conducted by Lewis, Linford specifically requested that his crews not be told where the infested wood was located. When the state of California issued its fact sheet, the only two treatment methodologies recognized as Primary were thermal pest eradication and fumigation.

Heat technicians treat many structures without knowing exactly where the termite infestations are located. Just as in fumigation, Heat can be applied to the entire structure. The treatment time for fumigation in the Villa Termite test was 22 hours of exposure and then it was (and is) not ovacidal. In one of the two phases in Dr. Lewis’s study, fumigation did not achieve a 100% kill. Thermal pest eradication heat achieved a 100% kill in six hours of treatment time. Entrance into the treated structure during the entire Heat treatment was possible for all three phases of the study.

Lewis presented his findings at the 1996 Pest Control Operators of California convention in Palm Desert. The press corps continuously badgered him for comments regarding which methodology he would recommend. Lewis challenged the reporters stating, “Why don’t you ask me what I was most impressed with?” When they asked, Dr. Lewis replied, “I was most impressed with heat (Dr. Linford’s thermal pest eradication).”

We developed the GreenTech Heat technology to be efficacious against all forms of insect pests. Give us a call. We are ready to help or consult with any unique applications.

GreenTech Heat provides organic and pesticide-free bed bug heat treatment solutions for airbnb, hotel and motel owners, and property management companies to exterminate and eliminate bed bugs and other insect infestations while avoiding the potential negative side affects of pesticides. Heat provides the positive side effect of freshening the air in a structure by denaturing many allergens and destroying the chemical basis of many odors. Our equipment will kill bugs and black widows with thermal remediation.